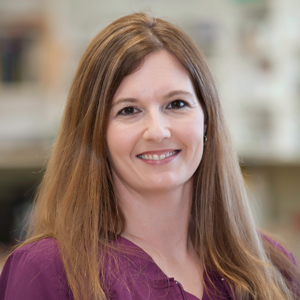 "I learned to love anesthesia and not let it intimidate me, which happens very often in our field. I found myself drawn to animals which were a little riskier to anesthetize. If there was a brachycephalic breed that needed anesthesia, I wanted it to be my case!"

Jaime's other specialty area at MSU was orthopedics. Her department was one of the first at MSU to make the Tibial Plateau Leveling Osteotomy (TPLO) for cranial cruciate surgery repair available to canines, but their department didn't stop there! Soon after the TPLO they brought arthroscopy to the small animal orthopedic department.  This was a noninvasive way to help animals with joint repairs such as osteochondrosis dissecans (OCD) and elbow dysplasia.  Jaime's favorite part of her time spent at MSU was educating the clients and seeing the animals that once came in with such debilitating pain leave feeling relief! "It's a great feeling knowing you helped relieve that animal's pain and gave them a better quality of life!"

Jaime went on to work for Pfizer where she worked in their Safety Pharmacology department and specialized in the central nervous system group. After Pfizer's closure in Ann Arbor, Jaime decided to take some time off to raise a family.  She is just recently re-entering the work field.  She is extremely happy to be back fulfilling one of her passions, emergency medicine!

Jaime's interests include spending time with her husband and four daughters, camping, reading, and riding her horse. Jaime has one dog, one cat and one horse. She wishes she had more animals, but says she gets to love on the animals she cares for at work a little extra this way!