Dogs and Snakes Don't Mix... and That Can Be a Problem! 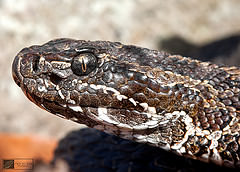 As the temperatures begin to warm, wildlife starts to move. Animals start coming out of hibernation to find food and look for mates. This includes the snakes. These guys have spent the winter in hibernation and are ready to enjoy the warmer weather, just like you and I. However, dogs and snakes don't usually go well together. Dogs tend to be fascinated by snakes because they really just look like a self powered toy! But an interaction between a snake and a dog usually ends badly, often for the snake - but in some situations an encounter with a snake could end very badly for the dog.

In Michigan, we only have one species of venomous snake, the Eastern Massasauga (Sistrurus catenatus catenatus). The Eastern Massasauga Rattlesnake is a pit viper with a triangular shaped head and dark brown, slightly rectangular patterns on the body that are set against a slightly lighter grey to dark brown background. The pupils are elliptical in shape. The adults can grow up to 2-3 feet long and do exhibit a distinctive rattle.

The Eastern Massasauga is found only in Michigan's Lower Peninsula. Although it is fairly uncommon to run into one, please take caution when walking in wetland areas. This is a shy, quiet species of snake that avoids humans and confrontation in general. It lives in marshy habitats and is well camouflaged. If you have been out walking in the snake's habitat, and you walked near one, there's a good chance it never even moved. They don't attack - but they will react when disturbed or threatened. If your dog finds one, they will most likely strike to protect themselves. Unfortunately, this can result in your dog being envenomated, which means they need prompt medical attention and may need Antivenin to treat the bite.

If your pet is bitten by a Massasauga (or any snake), DO NOT try to suck out the venom. Rinse the wound with clean water and promptly transport your pet to the veterinarian. The amount of venom produced by a Massasauga is meant to take down their typical prey such as rabbits, mice, voles, frogs, and other small animals. In those small animals, the venom can cause quick paralysis and death. Many defensive strikes against larger animals, including large dogs and humans, are actually dry strikes (meaning no venom is injected). However, there is no way to be sure when that happens. Fatal strikes on humans are rare; however, they can cause a nasty wound. 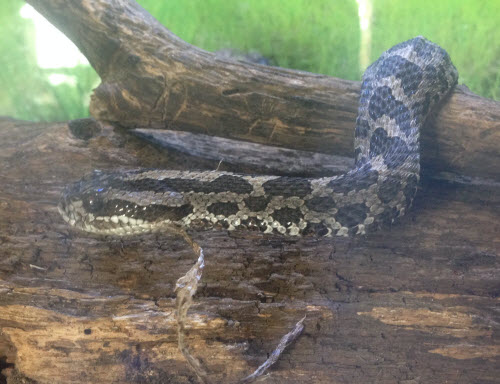 If you suspect your pet has been bitten, prompt medical attention is very important as it can be a life threatening incident. Rattlesnake venom quickly immobiizes the victim, starts to breakdown body tissues, and disrupts the body's ability to coagulate the blood. Snake bites are also extremely painful. If envenomated than treatment will require Antivenin, and AEC is one of the few clinics in the area that stocks Antivenin at all times.

If you ever encounter a Massasauga, DO NOT PICK IT UP OR HARRASS IT! Take a picture from a safe distance and report it to the Michigan Department of Natural Resources or to the Michigan Herp Atlas. If you are concerned that the snake is endangering your pets or family, stay out of the area where the snake was seen. Do not try to move it. It will most likely avoid you as much as you avoid it.

For more information check out the following websites: