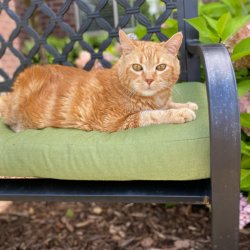 Kramer was born on August 16 2008, we rescued him in 2009 at a tabby rescue at pet smart. He lived a good 13 years. But whenever we went on vacation we would always come back watching him brethe hard. But after a day or two it would stop, But out of no where he started breathing hard, so we gave him a few days to see if he would stop. He didn't stop though, we had is litter box and food in the basement and he would stay down there for hours just so he wouldn't go up stairs. Then we took him to the vet, we thought It would be allergies or asthma but he had to be put to sleep. because he had heart disease It was his time and he is probably waiting for me and my family at the rainbow bridge. He would always cuddle next to me when he had the time, or let me play dress up with him when I was younger. He was the best cat ever
/Ava, 11 .